This mexican Pork Leg Roast or Pierna de Puerco en inglés is a most have during any dinner celebration. This is a traditional recipe for a pork leg roast for Navidad or Año Nuevo in Mexican homes and there are different adobos to marinate it.

In the process to make this pierna de puerco we are making some small wholes in the meat that we are going to fill with a mixture of prunes, almonds, pecans and dried apricots. This is call mechar la carne. We are going to brine the pork meat in a mixture of fruit juices and white wine.

The result is an oven roasted pork leg juicy, tender and simply espectacular. The best part is that the ingredients we are using you probably have them at home.

We are getting into some hispanic culinary culture in here. In Mexico and Spain mechar carne o puerco mechado is to make wholes with a knife in the meat and the fill those wholes with dried fruits, nuts, or as many food ideas you can imagine.

In Venezuela, Cuba an other hispanic countries they call carne mechada to the shredded beef. This recipe is made by a mexican mom living in Chicago so we are making wholes in that pork leg!

HOW TO CLEAN A PORK LEG

The easiest way to start preparing a leg of pork is when you order it at the butcher shop, ask the butcher to remove the skin. The pork leg is covered in a thick layer of fat.

If you already have the leg at home, remove part of the fat layer with a knife and if you don’t have a bag you can marinate on a tray.

The marinade is the secret to having a delicious leg of pork full of flavor and super moisture. This time I am going to teach you how to make a marinade in fruit juice and white wine.

The technique that I use to marinate any of my animal proteins is to leave them marinating in a bag. For this recipe you can use the same bag that they put the leg in or one of those Reynolds oven bags that they sell to prepare turkey in the oven at Christmas.

You can also use the traditional tray and go soaking. If you do it in a tray, cover it well with plastic or aluminum so that the meat does not dry out.

STEP BY STEP FOR THE PERFECT MARINADE

Place the leg in the plastic bag and add the marinade. Close the bag and turn so that it goes through the entire leg.

Place in the refrigerator and let it rest. Every time you open the fridge, flip the pork leg so it can marinate from everywhere.

Blend all the ingredients to bring the flavors together and this is the marinade for our pork. White wine is optional.

Before putting pork leg in the bag to marinate, make holes with a knife in the meat. About 1 centimeter long so that the marinade enters and then we will use those same hole to tuck the leg.

Pass it through the food processor or blender to grind a little and mix the ingredients.

Take the mixture and fill in the slits that we had made in the pork and fill them with the loaf that we just made.

The trick is to keep it moist but at the same time let the leg take on the roasted flavor. Many people bake it covered in foil but that gives the effect of a steamed pork leg.

HOW DO YOU KNOW THAT IT IS READY

A very easy way to know if your pork leg is already cooked is to check the bone. If the bone has separated from the meat, it means that it is already cooked. You can also bury a knife and make sure that the juice that comes out of the leg is transparent, if it comes out red it still lacks cooking.

To give the final touch to our juicy roast leg in the oven, we are going to varnish it so that in addition to being delicious it is beautiful. This is a simple recipe to glaze the leg for a final touch of flavor.

Mix the ingredients very well and with a kitchen brush or a spoon, place the mixture over the entire surface of the leg. 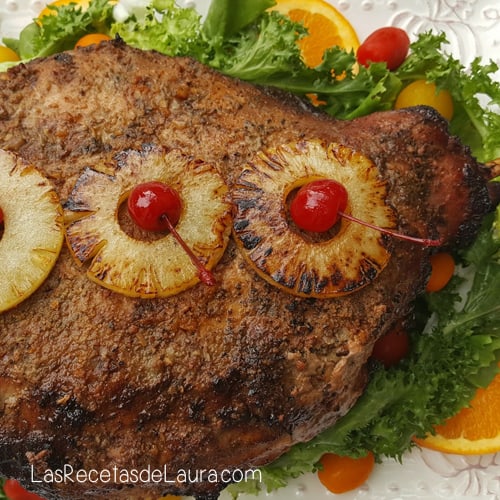 HOW TO DECORATE AND SERVE A PORK LEG

I used pineapple slices in syrup and a cherry in the center after placing the glaze and I put it in the oven for an extra 10 minutes for the flavors to settle and the pineapples take on a little color.

HOW TO MAKE ALMOND MILK with a vanilla twist HOSPITALIZED AFTER A REACTION TO THE VACCINE